RavenSaga is a neofolk duo based in the United Kingdom.  While their music is in line with modern neofolk artists, they also incorporate elements of neoclassical, dark wave and folk into their music to make it a blend that is quite unforgettable.
The Shadowdweller is a single song that runs for about 6 minutes.  It is based around a gorgeous, ethereal piano melody that in its entirety, switches moods more times than I can count.  If you just focus on the piano and nothing else, the minute you feel happy, a melancholic chord structure is utilized, making it a roller coaster of a song.  The amount of emotion drawn out by just the instrumentation is incredible alone but when you add in the vocals, you get an even bigger tidal wave of emotions and feelings that rush over you.  The lyrics tell the sad tale of inner darkness consuming oneself.  The struggles of inner conflict are overpowering and all one can do is wish to see the light shining through the darkness.  After a while, all that seems feasible is death itself, and you hope and pray it comes and takes you away.  It is a dark and depressing story that is contradicted by the joyous sounding vocals, which is far from a bad thing.  The sorrow and joy felt simultaneously is quite satisfying and exciting.
RavenSaga will be releasing a full demo soon, the exact date has yet to be announced.  I hope to hear it soon, as I am loving the message of the band and the sound of their music as a whole.  It sounds like something that would be playing in an old mansion on a vintage phonograph, giving it a sense of class and elegance.  Overall, RavenSaga is a promising project and once the demo is released, I hope to be able to review it!
Posted by Samyaza at 6:09 PM No comments:

Ruairi O'Baoighill - The Faceless One

Ruairi O'Baoighill is a dark ambient artist from Galway, Ireland.  He has been making music for a few years and has just recently released his latest album, The Faceless One.  The Faceless One is a dark and scary album, influenced heavily by occult rituals and the temptations of darkness.

One thing that really stands out throughout every track is that they are constantly evolving within themselves.  No track ever gets boring, they all manage to keep the listener involved and interested.  The use of samples and instrumentation change up the sound in a nice way so this doesn't sound completely computerized.  While the production is extremely clean and well done, it never gets to the point where it sounds like a piece of digitally created sound.  Echoes were utilized a lot in The Faceless One, adding depth to the atmosphere the music creates.  It almost feels like you are in a pitch black room and these noises you hear keep fading away into the blackness.  The sporadic use of vocals will send shivers down your spine.  The eerie sound they carry sounds like a ghost in the darkness, watching your every move.

The Faceless One is a truly terrifying album.  While it is quite scary, it is also beautiful in the sense that it is masterfully crafted and is not a rushed piece of work.  Every detail sounds exactly how it is supposed to and is right where it needs to be within the music.  The haunting atmosphere gives it a lot more momentum and can keep listeners interested.  This is an album that should be heard by every fan of dark ambient music!
Posted by Samyaza at 9:49 PM No comments: 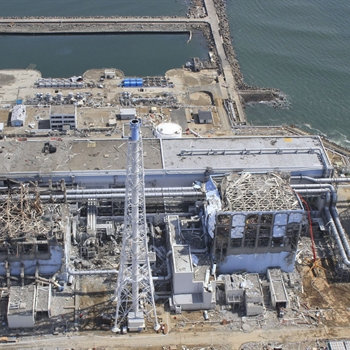 Tamayurakurage is a very interesting project from Japan.  I use the word interesting because since its inception, he has released a ton of music!  Honestly, I stopped counting all of the albums on his Bandcamp page once I hit 100 and I wasn't a quarter of the way down the page.  Most albums are only one track but every one that I clicked on was in between 40-60 minutes.  The amount of albums is quite impressive but I believe in quality over quantity and I think Tamayurakurage suffers from that.

Fukushima Hiroshima is representative of the Fukushima power plant meltdown that happened in 2011 where 3 of the 6 reactors at the Fukushima power plant overheated and released radioactive materials into the ground and air.  With a concept like that behind the music, you have so much room to grow, taking the music anywhere you want.  The concept I see working the best would have been the story of the events that caused the meltdown, the meltdown itself, and the aftermath.  A story behind the music would have really empowered the music and could have drawn out so much emotion from the listener.  Unfortunately, Fukushima Hiroshima is very unappealing and repetitive.  There is almost no differentiation of sound in the 40 some odd minutes that the release contains.  It is the same sound swelling each and every time at almost the exact same pitch.  The background sound does change a bit, but nothing to where it makes for an incredibly lasting impression.  Frankly, this release sounds a bit lazy.  While I respect all individuals that make any sort of music, there wasn't very much thought added into this piece of it, as it sounds like it is the same thing over and over.
Posted by Samyaza at 6:02 PM No comments:

A few days ago, I reviewed Hierofania's latest album, a self titled masterpiece that leads you on a futuristic, spacey journey through the cosmos.  I really liked the album as it took me on a journey that not many ambient projects have been able to take me on.  Space-themed music is not the type of ambient I usually enjoy but Hierofania's album really broke past that barrier and I genuinely enjoyed it.  Now we are going to take a look at some of their previous work, their first album entitled Ancestralidade Revelada.

Ancestralidade Revelada is a dark and lonely album that explores the haunted side of Hierofania.  Unlike their self titled album, horror is a key factor in every track on the album.  Whether that be static bursts like radio transmissions lost in the night, high pitched squeaks or a howling of a wolf in a dark and rainy thunderstorm, samples that are meant to arouse fear are used to great effect.  The sound is crystal clear, albeit a few exceptions, and there are elements of electronic music in here, something that aids in the futuristic aspects of the music.  I believe that the mix of scarier sounding samples with the electronic ones leads Ancestralidade Revelada to suffer from a bit of identity crisis.  It is pulling two separate ways and it would be extremely difficult to master the full effects of each one while simultaneously blending them together.  Just like their other work, this album also is restless and aggressive.  There is never a second of relaxing noise or droning, giving you more to focus on and not lose your attention easily.  This being said, you can easily listen to the album all the way through without losing focus on the music.

Ancestralidade Revelada is an impressive piece of work but lacks the dedication to one solid sound.  I praise Hierofania for having many different influences within their sound and the way they are striving to become their own entity is respectable, however they are not there yet.
Posted by Samyaza at 2:41 PM No comments: 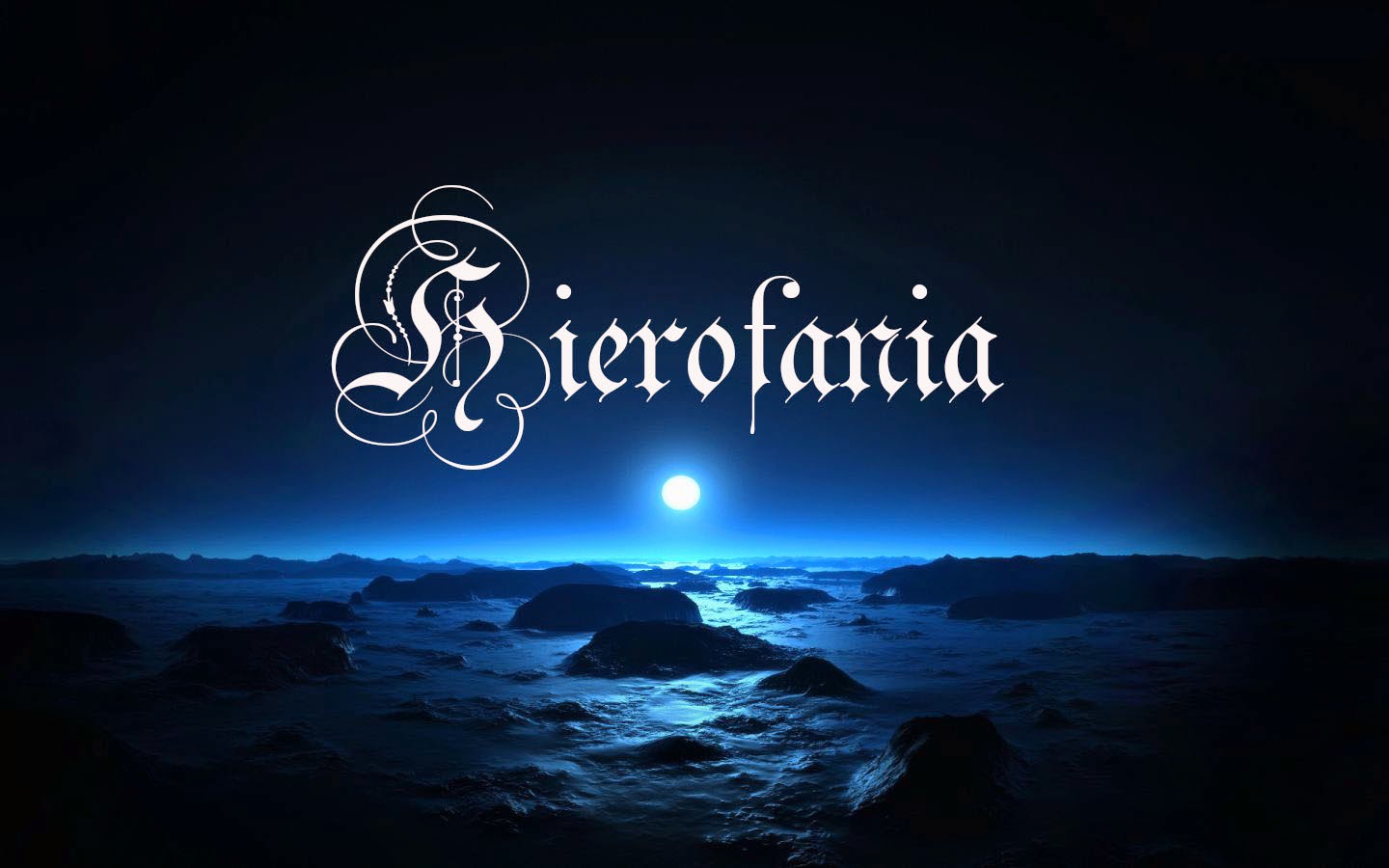 Hierofania is a dark ambient project hailing from Brazil.  Throughout their self titled album, there is a spacey feel to the music, like you are soaring through the stars into the center of the galaxy.  The sound is extremely aggressive at times, throwing some in-your-face swells and shrieks at you when you least expect it.  You can feel your breath shorten at points when the 'space' vibe takes over and controls the atmosphere.  The atmosphere created is a very calming and meditative one.  I am not sure if this is the goal Hierofania's two members set out to do, but that is the feeling I got from it.  There are not very many haunting and scary parts in this release, but that works as an advantage for them, giving their album more room to develop and carry on a story in the listeners mind.  The ritualistic aspects are present within the music, especially nearing the center of the album.  The music was created with the intention to worship the Divine Cosmos, and it definitely does just that with all the futuristic sounds and samples used.  Even though there is a central theme throughout, Hierofania never gets dull or boring at any point.  While this is not a release to sleep to, as it is quite aggressive at times, the journey the music will take you on will be an adventure filled one through the deepest and darkest parts of our universe while giving your mind room to develop a story based on your personal experience with the music.  Recommended for those who enjoy spacey and entrancing music with a slight twist.
Posted by Samyaza at 10:25 PM No comments:

Phantom Ship is a dark ambient/drone project from Italy.  They have 3 releases out since their inception, their latest being a self titled full length with 7 (8 if you get the edition with the bonus track) tracks on it.  The soundscapes that Phantom Ship creates are based off of H.P. Lovecrafts writings and stories.  They also are the musical background that follow the stories of a phantom ship travelling the vast oceans.
I have listened to the live release and the self titled album and my personal feelings that were aroused were fear and depression.  It is an extremely provoking release that uses distant moans, unsettling drones and a dark melody to create a very chilling atmosphere.  It truly feels like you are following a ghost ship on its journey through the ocean, haunting other ships and their passengers at any given chance.  The haunted moans in the background of the music sound like the sounds of the ships crew moaning and screaming when they died, long long ago.
Their live release is very cool because it details the work that Phantom Ship puts into their music.  Every detail of the music sounds massive with the acoustics used to record and the atmosphere is just as creepy, if not more than the studio works.  The material featured is a combination of tracks from both albums.
Both studio albums, along with the live release, are available on Phantom Ship's Bandcamp page for a small price.  There are many different formats these releases are available on, so go pick one up!  It is worth it if you are looking for dark and desolate soundscapes.

Posted by Samyaza at 5:35 PM No comments:

Here at Darkness Unbound, we are dedicated to providing coverage of dark ambient, noise, drone, and experimental projects that deserve recognition.  All the music that will be featured here will be done so with the permission of the artists.  While we technically wont write up reviews of the music, I can promise that our thoughts will be provided and we will promote your music to as many people as we can.  If you wish to submit music, email us at darknessunboundblog@gmail.com
Thank you for your support, I hope you enjoy what is to come!
Posted by Samyaza at 10:06 PM No comments: